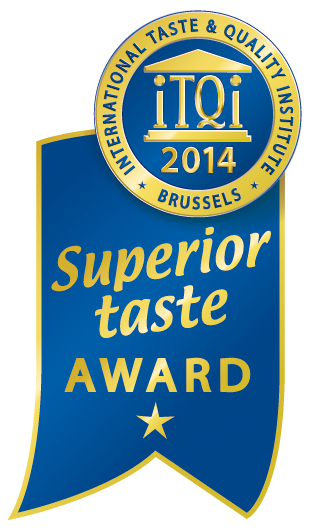 The “iTQi Superior Taste Award” is the only stamp of quality in taste granted by food and drink opinion leaders that are Michelin starred Chefs and Sommeliers.

The iTQi jury, regrouping 15 different nationalities, is composed of members of the most prestigious culinary institutions of Europe such as, the Maîtres Cuisiniers of France, the Académie Culinaire de France, the Academy of Culinary Arts, Euro-Toques, the Federazione Italiana Cuochi, the Jeunes Restaurateurs d’Europe, the Associaciones des Cocineros de España, the World Master Chefs Society, the Verband der Köche Deutschlands as well as the Association de la Sommellerie Internationale (ASI) for drinks.

Similarly to the famous Michelin guide of gastronomy, iTQi does not organize a competition but rewards products on their own merits. Only products having received a mark superior to 70% will be granted a « Superior Taste Award »

A sensory analysis based on the intensity of gustatory pleasure!

During the tests, each product is subjected to an individual blind tasting according to a rigorous sensory analysis procedure.

The tasters are asked to evaluate the products as if they were having them in their family home, not according to the standards of their restaurants.

Every evaluated product is scrutinized in the shape of a sensory analysis report for which criteria such as olfaction, vision, taste, after taste, texture, etc. are all taken into account by each Jury member. The latter also write comments and, when needed, suggestions for improvements.

After the tasting session, iTQi draws up a detailed graph of the different grades and summarizes the comments and suggestions of the Jury members for the participating companies. This information is truly appreciated by the producers as it helps to better understand the Jury’s opinion and become aware of potential areas of improvement.